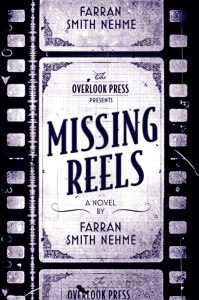 I don’t usually read romances, even of the screwball comedy variety, but being a film buff, I decided to check out Missing Reels  by Farran Smith Nehme, a lighthearted story about a young woman living in New York City who happens to be a huge fan of silent films.  She discovers that she’s living next door to a former silent film actress who starred in a now lost silent movie directed by a controversial German director.

It’s New York City in the late 1980s, and young Ceinwein (pronounced KINE-wen) lives in an apartment with her two gay roommates, Jim and Talmadge and works a minimum wage job at a vintage clothes shop.  There she meets Matthew, an Englishman who’s a postdoc working with a Math professor at NYU.  He’s at the store shopping with his Italian girlfriend, but when Matthew shows an interest in Ceinwein, romance blooms.

Around the same time, Ceinwein engages her elderly neighbor Miriam in a conversation and learns that she once starred in a long lost silent movie.  As a silent film fanatic, Ceinwein takes it upon herself to search for this long lost movie, thinking that if she can discover a copy, Miriam would be thrilled to see it again, but this is a misplaced assumption since Miriam’s feelings toward the film and the man who directed it are much more complicated than Ceinwein ever imagined.

The search for this elusive silent movie serves as a backdrop for the romance, as Ceinwein enlists Matthew’s aid in tracking down the missing film.  The deeper Ceinwein looks, the more complicated her relationships become with both Matthew and Miriam.

I really enjoyed Missing Reels, mostly because the story centers more on Ceinwein’s quest to find the missing film than on her romance with Matthew.  I found the whole search for the movie, THE MYSTERIES OF UDOLPHO, fascinating and enjoyed the story the most whenever Ceinwein was actively looking for it.  It made for a satisfying detective story.

The numerous conversations throughout the novel about movies, old movies in particular, were engaging and thoroughly entertaining.

One of the reasons I wasn’t crazy about the love story is that I didn’t particularly like Matthew’s character.  When we first meet him, he’s with his Italian girlfriend, yet he’s romancing Ceinwein almost immediately after, with no mention to Ceinwein that his other relationship is over.  I thought he gave off a bad vibe from the get-go, and frankly I had a difficult time understanding what Ceinwein saw in him.

Unlike Matthew and Miriam, Ceinwein is an affable character, and I enjoyed reading about her.   She’s witty and funny, and she’s confident yet vulnerable, traits that make her very attractive.

I also liked her roommates, Jim and Talmadge, and whenever they’re in the story, the book livens up quite a bit.

The story takes place in the 1980s presumably to include an aging silent film star as one of its main characters.  Plus, others who worked on THE MYSTERIES OF UDOLPHO are still alive in the story, making them available for Ceinwein to interview.  This would not have been the case if the story had a contemporary 2015 setting.  Other than this, the 1980s time period adds little value to the tale, nor does the novel do much to recapture the feeling of that decade.

Missing Reels is an enjoyable light read, especially for fans of old movies.  Ceinwein’s search for the missing silent film and the discussions that go along with it provide satisfying material for the hardcore movie enthusiast.  Plus, a lot of the snappy dialogue between Ceinwein and Matthew is reminiscent of the dialogue in the old black and white comedies, films featuring the likes of Cary Grant and Katherine Hepburn, and William Powell and Myrna Loye.

And for those of you who like love stories, Missing Reels satisfies as well, as Ceinwein is head over heels in love with Matthew, a man who by his own admission is not interested in leaving his Italian girlfriend, but as is the case with so many classic movie romances, the strong-willed heroine will not be denied.

A novel that hearkens back to the romantic comedies of yesteryear, Missing Reels provides both a lighthearted love story and a compelling account of one film buff’s quest to locate a long lost silent movie in one tightly written package that doesn’t miss a beat.