Welcome to another edition of THE HORROR JAR, that column where we feature lists of odds and ends about horror movies.

Believe it or not, there’s just one. 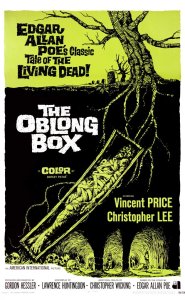 Screenplay by Lawrence Huntington, with additional dialogue by Christopher Wicking, based on the story by Edgar Allan Poe

Lurid tale about premature burial, voodoo, and revenge in this story about a vengeful brother who goes around terrorizing the countryside while wearing a red hood.  Vincent Price plays the lead, the man who tries to control his lunatic brother but constantly does more harm than good.  Christopher Lee is solid in a supporting role.  This film would have been so much better had Lee been cast as the evil brother Edward.  Still, as it stands, this flick is a heck of a lot of fun. 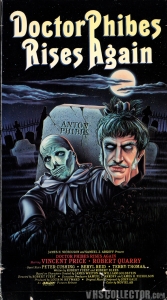 Sequel to THE ABOMINABLE DR. PHIBES (1971) isn’t as good as the first one but comes darned close!  Barely counts as a Price/Cushing pairing, since Cushing’s role is only a cameo.  Blink and you miss him.  Once again, Price steals the show as Dr. Phibes.  Robert Quarry adds fine support as Phibes’ rival.

Screenplay by Ken Levison and Greg Morrison, based on the novel by Devilday by Angus Hall

Price, Cushing, and Quarry are reunited in this effective yet flawed thriller about a horror actor (Price) making a comeback in the midst of a series of murders which seem to implicate his famed alter ego from horror movies of old, Dr. Death.  An odd movie.  At times, it’s really good, but at others it’s aimless and without direction.  The best part is finally, at long last, both Price and Cushing have sizable roles, Price as the haunted horror film star, and Cushing as his friend and screenwriter. They get to spend considerable screen time together.

And just for fun, here’s a reprint of last year’s list of the two films which starred all three, Price, Lee, and Cushing:

Screenplay by Christopher Wicking, based on the novel The Disoriented Man by Peter Saxon

Sadly, neither of these movies is very good.  But you can’t beat the cast!