Here’s my latest IN THE SPOOKLIGHT column, available now in the February 2016 edition of THE OFFICIAL NEWSLETTER OF THE HORROR WRITERS ASSOCIATION, on the third Universal Frankenstein movie, SON OF FRANKENSTEIN (1939) starring Boris Karloff and Bela Lugosi.

It’s my 150th IN THE SPOOKLIGHT column. 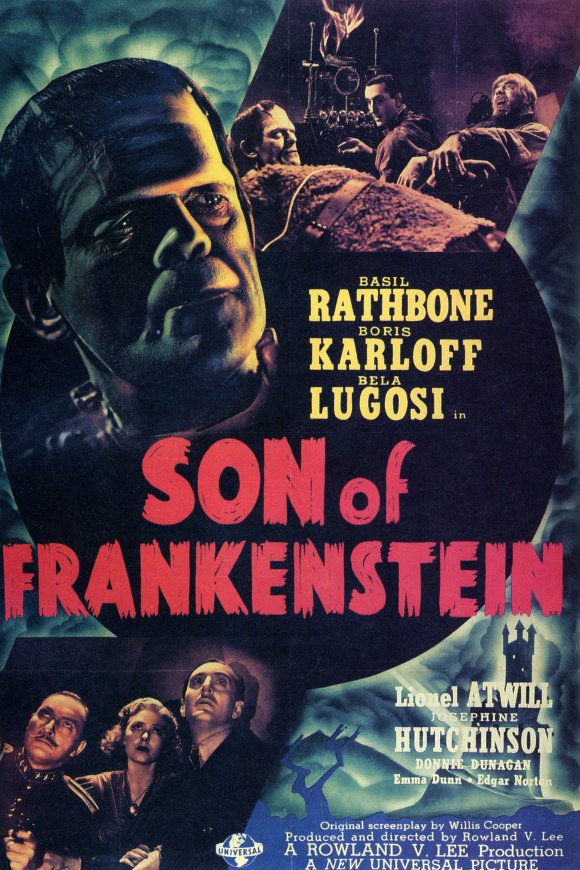 Welcome to the 150th IN THE SPOOKLIGHT column!

To celebrate, let’s look at the Universal Monster classic, SON OF FRANKENSTEIN (1939).

SON OF FRANKENSTEIN is the third film in the Universal Frankenstein series.  It marked the third and final time that Boris Karloff would play the Monster, and while Karloff’s presence in this one is still key, really, the biggest reason to see this movie is to watch Bela Lugosi play Ygor, arguably his second best film role after Dracula.

SON OF FRANKENSTEIN takes place several decades after the events of THE BRIDE OF FRANKENSTEIN (1935).  Henry Frankenstein (Colin Clive) has died, and his adult son Baron Wolf von Frankenstein (Basil Rathbone) returns home to his father’s estate along with his wife and young son, after being away for many years.

Wolf and his family are given the cold shoulder by the villagers, who remain scarred by memories of the Monster.  In fact, the local police inspector, Inspector Krogh (Lionel Atwill) even offers Frankenstein and his family protection from the villagers, an offer which the proud Wolf scoffs at.

While searching the ruins of his father’s laboratory, Wolf comes across old Ygor (Bela Lugosi), a man who had once been hung for the crime of stealing bodies but survived the hanging.  When Ygor learns that Wolf is a scientist like his father, he brings Wolf to an underground cave beneath the laboratory where he shows him the sleeping body of the Monster (Boris Karloff).

Intrigue, Wolf decides to bring his father’s creation back to full strength, which pleases Ygor, since he uses his “friend” the Monster to murder the members of the jury who had sent him to the gallows.

SON OF FRANKENSTEIN is the most elaborate of the Universal Frankenstein series and it’s also the lengthiest, clocking in at 99 minutes.  While it can be a bit talky, it does a terrific job developing its characters, as the three new characters in this film, Wolf Frankenstein, Inspector Krogh, and Ygor are among the series’ best.  It was originally going to be shot in color, but the decision was made to film it in black and white when initial screen tests of the Monster in color failed to impress.

While SON OF FRANKENSTEIN has a lot going for it, it’s nowhere near as good as the first two films in the series, FRANKENSTEIN (1931) and THE BRIDE OF FRANKENSTEIN (1935).  That being said, it’s the one film in the series that is closest in style to the Hammer Frankenstein movies which were to follow twenty years later, as it spends more time on characterizations and less on the Monster, and it features opulent sets.

Even though director Rowland V. Lee does an admirable job at the helm, the film really misses the direction of James Whale, who directed the first two Frankenstein movies.  Those films were paced better and possessed a chaotic energy about them that really captured the persona of the Monster, and in both those films, Karloff’s performance as the Monster stole the show.

Also, the Monster becomes a “patient” in this movie, spending lots of time lying on a lab table waiting to be energized by Doctor Frankenstein.  Unfortunately, this trend would continue as the series went on, with the Monster spending more and more time reclining on his back, rather than  moving around terrorizing people.  It’s also established for the first time in SON OF FRANKENSTEIN that the Monster cannot die, that Henry Frankenstein created him in such a way that he would live forever.  This would make it convenient for Universal to keep bringing the Monster back in subsequent movies.

Karloff’s best scene as the Monster in SON OF FRANKENSTEIN is when he meets Wolf Frankenstein for the first time.  As he gets right in Wolf’s face, easily terrifying the man, he seems to be thinking back to the man who created both of them, Wolf’s father, Henry Frankenstein.

Ygor (Bela Lugosi) and the Monster (Boris Karloff) are up to no good in SON OF FRANKENSTEIN (1939).

But again, the best part of this movie is Bela Lugosi’s performance as Ygor.  He steals nearly every scene he’s in.  My favorite bits include his coughing on a jury member in a courtroom scene, and his answer to Wolf when asked if he killed their butler Benson:  “I scare him to death.  I don’t need to kill him to death!”  And then he laughs.  Of course, he’s also lying since the Monster did murder Benson.

Basil Rathbone is adequate as Wolf Frankenstein, though he does tend to ham it up a bit.  I definitely miss Colin Clive as Henry Frankenstein.  Of course, the writers went with the “son” story-line rather than another Henry Frankenstein tale because Clive had sadly passed away shortly after making THE BRIDE OF FRANKENSTEIN.

Lionel Atwill also has one of his best roles here as Inspector Krogh, the one-armed inspector spoofed so effectively by Kenneth Mars in Mel Brooks’ YOUNG FRANKENSTEIN (1974).  Krogh is a memorable character, with a great back story:  he has one arm because the Monster ripped it from its socket when he was a child.  Yikes!

Inspector Krogh (Lionel Atwill) prepares to tell Wolf Frankenstein (Basil Rathbone) the story of his childhood encounter with the Monster.

The screenplay by Willis Cooper is definitely talky, but it does tell a good story and does a terrific job developing its characters.  SON OF FRANKENSTEIN also features arguably the best music score of the series, by Frank Skinner.

SON OF FRANKENSTEIN  is a fine third film in the series, not as effective as the first two, but definitely better than the films which would follow it, and its cast, which features Boris Karloff, Bela Lugosi, Basil Rathbone, and Lionel Atwill is second to none.

The biggest of the Universal Frankenstein movies, SON OF FRANKENSTEIN is a well-made and worthy installment in the Frankenstein canon.

One thought on “IN THE SPOOKLIGHT: SON OF FRANKENSTEIN (1939)”