Here’s my latest IN THE SPOOKLIGHT column, on THE LEGEND OF HELL HOUSE (1973), published in the December 2015 edition of THE HWA NEWSLETTER, the Official Newsletter of the Horror Writers Association.
Enjoy!
—Michael
IN THE SPOOKLIGHT
BY
MICHAEL ARRUDA

Not only is December a great time to watch a haunted house movie, but the plot of today’s movie ­ THE LEGEND OF HELL HOUSE (1973) ­­­ actually takes place in December. How cool is that? Okay, so I’m easily amused.
I actually saw THE LEGEND OF HELL HOUSE when it was first released at the drive­in as part of a double feature with THE OTHER (1972). I was nine years­old when my parents took my younger brother and me to see this double bill, and while I slept through THE OTHER, I remember enjoying HELL HOUSE. So, there was certainly some nostalgia watching this one again recently on Netflix Streaming, especially since I hadn’t seen it in years.
Its tale of an investigative team probing a haunted house, trying to prove or disprove the existence of ghosts, reminds me an awful lot of Shirley Jackson’s “The Haunting of Hill House” and the movie THE HAUNTING (1963) which is based on the Shirley Jackson story. But it’s actually based on the novel Hell House by Richard Matheson, who also wrote the screenplay for the movie.
In THE LEGEND OF HELL HOUSE, Dr. Barrett (Clive Revill) a physicist, leads the examination into Hell House. His team includes his wife Ann (Gayle Hunnicutt), a psychic Florence Tanner (Pamela Franklin), and a physical medium, Benjamin Fischer (Roddy McDowall), who has the distinction of being the only survivor from a previous investigation into the house. 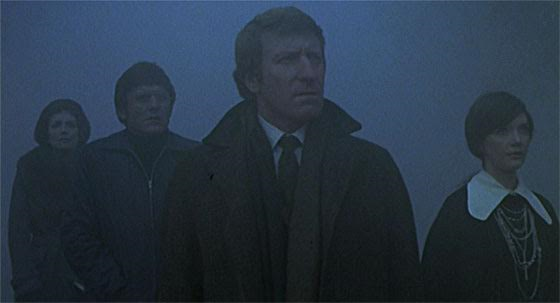 So, do ghosts exist or not? Dr. Barrett seems hell bent on proving once and for all that they do not exist, but the spirit that occupies Hell House has other ideas.
THE LEGEND OF HELL HOUSE is ghostly fun from start to finish. It’s full of spooky atmosphere and contains plenty of creepy scenes.
Director John Hough, fresh off his horror hit for Hammer Films, the vampire film TWINS OF EVIL (1971) starring Peter Cushing, pretty much strikes gold again. Both of these films are excellent horror movies. Hough would go on to direct the Walt Disney classic ESCAPE FROM WITCH MOUNTAIN (1975), as well as its sequel RETURN FROM WITCH MOUNTAIN (1978) starring Christopher Lee. Hough would also direct Peter Cushing’s final movie, BIGGLES: ADVENTURES IN TIME (1986).
Roddy McDowall leads a fine cast. McDowall is excellent here as Benjamin Fischer, the man with the most insight into Hell House since he had been there before. I was already a Roddy McDowall fan when I saw this at the movies in 1973 because of the PLANET OF THE APES films. THE LEGEND OF HELL HOUSE was probably the first movie where I actually got to see his face!
So that’s what Cornelius looks like!
Clive Revill is authoritative as physicist and lead investigator Dr. Barrett, and Gayle Hunnicutt is memorable as his wife Ann. Pamela Franklin makes for a beautiful and oftentimes vulnerable psychic Florence Tanner. Even Michael Gough shows up as a corpse, which is a nice way of keeping this Hammer favorite from his signature overacting!
All four of the main characters go through changes since they are all affected one way or another by the spirit occupying Hell House. McDowall’s character probably fares the best, as he seems to
be best equipped to fend off the ghost.
Clive Revill’s Dr. Barrett, on the other hand, the supposed the leader of the team, is influenced by
the Hell House spirit pretty much from the get­go, as he quickly becomes irritable, angry, and worst of all confused. Sure, these could just be personality flaws, but more likely, they’re the work of the ghost.
Barrett’s wife Ann becomes sexually aroused and continually makes advances towards Ben Fischer, while psychic Florence senses who the ghost is but no one on her team seems to believe her, probably because she too exhibits odd behavior.
Is this assembled team just a group of oddballs? Or are they all influenced and infected by the supernatural presence residing at Hell House? You know the answer to that question, and that’s what makes THE LEGEND OF HELL HOUSE so much fun.
The prevailing feeling throughout THE LEGEND OF HELL HOUSE is one of uncertainty and doubt. The supernatural entity makes its presence known immediately, and the characters all become affected quickly, even if they don’t realize it.
THE LEGEND OF HELL HOUSE is an excellent horror movie and is yet another quality horror film from the 1970s, a decade which is chock full of horror classics. Sure, there are the big budget  classics like THE EXORCIST (1973), JAWS (1975), THE OMEN (1976) and ALIEN (1979),  but it’s also the decade of THE LAST HOUSE ON THE LEFT (1972), THE TEXAS CHAINSAW MASSACRE (1974) and HALLOWEEN (1978). It’s also the decade of films
like THE FOOD OF THE GODS (1976), THE ISLAND OF DR. MOREAU (1977), and KINGDOM OF THE SPIDERS (1977), low budget films that didn’t become huge hits but provided quality horror entertainment all the same. THE LEGEND OF HELL HOUSE falls into this latter category.
As we look back today at the 1970s, a decade famous for its bad hairstyles and disco music, it’s quite clear that for horror movie fans, it’s one of the best decades ever. There are a lot of really good horror movies made in the 1970s.
If there’s one weakness regarding THE LEGEND OF HELL HOUSE it’s the film’s plot. Its haunted house tale is nothing I haven’t seen before, and even though the film has fun with it, and it all works, at the end of the day, it’s still just another haunted house story with all the similar
trimmings.
What makes THE LEGEND OF HELL HOUSE stand out among other films of its type is a talented cast, strong direction, and a decent script by Richard Matheson.
As you make the rounds this holiday season, visiting family and fiends­­­ er, friends, don’t forget  to stop by HELL HOUSE. There’s someone there who’s dying to see you.
­­­END­­­

Welcome to another edition of THE HORROR JAR, that column where we feature lists of odds and ends about horror movies.  Today, since we’re smack dab in the middle of summer, we look at the JAWS series.

Now, I love JAWS just as much as the next guy.  In fact, JAWS (1975) is one of my all-time favorite movies.  But I think it’s sufficient to say that in spite of the film’s success, it’s a film that should have been a stand-alone movie.  All of its sequels are unnecessary.

Seriously, if you really wanted to continue the story of JAWS, you would have followed the surviving characters from the first movie, Chief Brody (Roy Scheider) and Matt Hooper (Richard Dreyfuss), and any believable story worth its salt wouldn’t have featured a giant shark since what are the odds of that ever happening again?  And I don’t think people would have paid money to see Brody take on another island issue, or Hooper battling a giant eel for example.  JAWS was about a killer shark, and unless Brody and Hooper were going into business as “Shark-Busters” writers would be hard pressed to write a believable second story about these two tangling with a monster shark.

Now, I actually like JAWS 2 (1978) because it does feature Roy Scheider again as Chief Brody who does cross paths again with a monster shark, and JAWS 2 is a fun movie, but it’s certainly not very believable.  A second killer shark returns to the same beach a few years later?  And if you read between the lines it’s come back because it’s seeking vengeance for the first shark’s death?  Seriously?

The next two films in the series JAWS 3 (1983) and JAWS: THE REVENGE (1987) are flat out awful, and the idea that sharks have it in for the Brody family just never really works.

So, here they are, the JAWS movies:

Screenplay by Peter Benchley and Carl Gotlieb, based on Benchley’s novel, Jaws.

The perfect summer horror movie, JAWS has become one of the most iconic movies ever made, chock full of memorable characters and memorable lines.  You’re going to need a bigger boat.  It also has one very hungry shark.  Directed by a 25 year-old Steven Spielberg, this intense frightening film is that rare example of a movie being better than the book on which it is based.  I saw this at the movies when I was just 11 years old and it scared the stuffing out of me!  Excellent movie, one of the best sea adventure/horror movies ever made, and it remains just as powerful today as it first did in 1975.  Iconic music score by John Williams, probably his best ever.

Sequel has Chief Brody once again tangling with a killer shark on Amity Island, this time without help from Richard Dreyfuss’ Hooper and Robert Shaw’s Quint, and so this one is about  one third of the fun.  Shark scenes are still rather effective, but gone is Spielberg’s “less is more” style from the first movie.  We see an awful lot of the shark in this one, and that’s not always a good thing.  And the story about a monster shark returning to Amity a few years after the events of the first film, and to have the mayor still argue to keep the beaches open, is simply not very believable.

The grown-up sons of Chief Brody take on a killer shark at a Sea World type theme park in Florida.  Skip this nonsense and watch REVENGE OF THE CREATURE (1955) instead.  The Creature film did a much better job with a similar plot.  This one features a ridiculous story— I still can’t believe that Richard Matheson co-wrote this!— awful characters, and some of the worst 3D effects ever seen in a movie.

The worst of the series.  It’s hard to believe there could be a movie worse than JAWS 3-D, but this film is proof that there is.  Lorraine Gary returns as Ellen Brody and teams with Michael Caine playing a man named Hoagie— is he to become a shark sandwich?— as they try to save her sons from a— you guessed it, a monster shark— who has it in for the Brody family.  The sharks have taken note, I guess, that Chief Brody killed two of their own.  This one features the absolute worst ending of the series, one of the most abrupt and silly endings of any horror movie period.  The most memorable part of JAWS:  THE REVENGE is the true story that Michael Caine skipped the Oscars on the night he won Best Supporting Actor for Woody Allen’s HANNAH AND HER SISTERS (1986) because he was filming JAWS:  THE REVENGE.  Life is cruel.

JAWS is one of the best movies ever made, so good you can watch it year after year and it still holds up.  It’s a four star movie.

But its sequels are not.