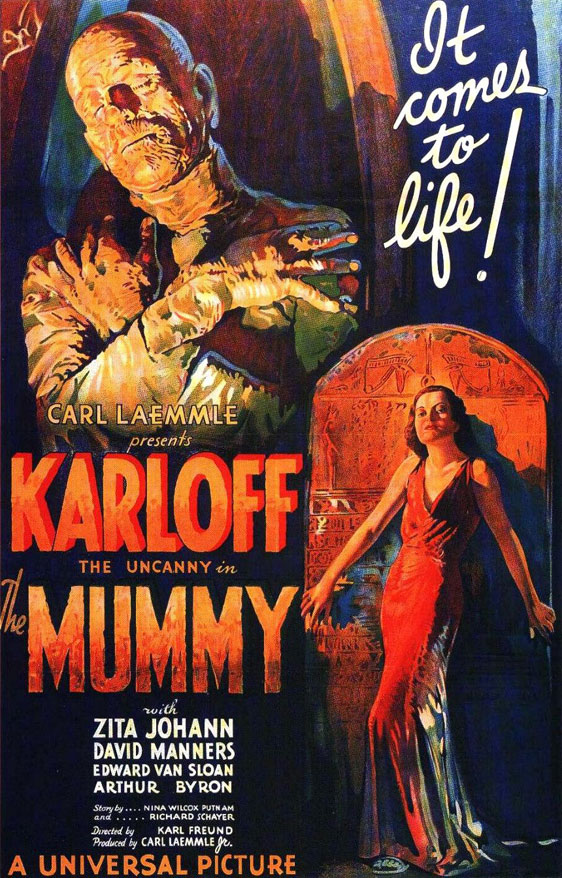 Here’s my latest IN THE THE SPOOKLIGHT column, on the Boris Karloff classic, THE MUMMY (1932), appearing now in the August 2016 edition of the HWA NEWSLETTER, and it’s a reprint of a column which originally appeared in those pages back in August 2009.

THE MUMMY showcases a masterful lead performance by Boris Karloff as the undead mummy, Im-Ho-Tep, exceptional direction by DRACULA (1931) cinematographer Karl Freund, remarkable mummy make-up by Jack Pierce, and unlike FRANKENSTEIN and DRACULA, a music score.

The screenplay for THE MUMMY was written by John L. Balderston, no stranger to classic horror tales.  Balderston adapted the play used for the screenply for FRANKENSTEIN (1931), which of course was adapted from the Mary Shelley novel, and he also wrote one of the stage versions of DRACULA, which served as the model for the Universal Bela Lugosi movie DRACULA (1931).

THE MUMMY opens in 1921 in Egypt, where an expedition led by Sir Joseph Whemple (Arthur Byron) has just discovered the remains of an ancient mummy, Im-Ho-Tep (Boris Karloff).  Doctor Muller (Edward Van Sloan) warns Whemple and his young assistant Ralph Norton (Bramwell Fletcher) not to ignore the ancient curse discovered along with the mummy, but the young assistant is too eager, and as he reads from the Scroll of Thoth, behind him, the mummy awakes.

It is probably the film’s most famous scene.  As the words are read, the camera focuses on the dead mummy’s face, and ever so slowly, the eyes open, and then the arm slowly moves.  When the mummy takes the scroll, the young assistant bursts into uncontrollable mad laughter, and as we learn later, “he died laughing.”

The action switches to 1932 (which was present day when THE MUMMY was released).  Im-Ho-Tep has shed his bandages and is using the alias “Ardath Bey.”  The make-up here by Jack Pierce is superb.  Without his bandages, Karloff really does look like the walking dead. 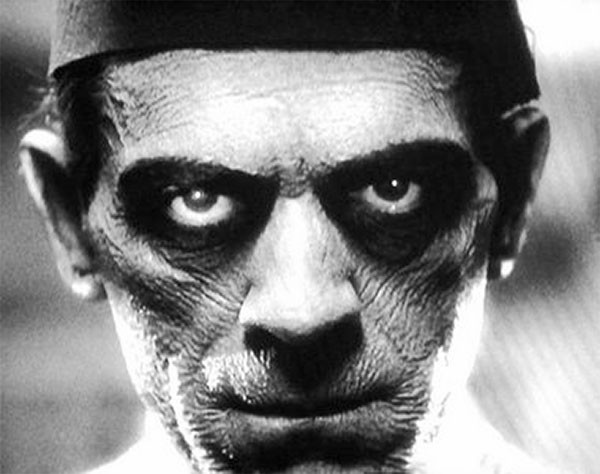 Im-Ho-Tep attempts to bring his long lost love, the princes Anck-es-en-Amon back to life.  He discovers that her soul is now in the body of Helen Grosvenor (Zita Johann), who happens to be in love with Joseph Whemple’s son, Frank (David Manners).  Im-Ho-Tep wants to kill her so he can resurrect her as an undead, but Frank Whemple and Doctor Muller stand in his way. 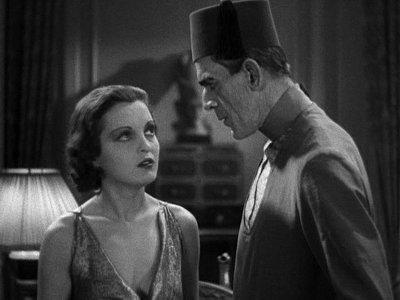 Helen (Zita Johann) falls under the spell of Im-Ho-Tep (Boris Karloff) in THE MUMMY (1932).

In THE MUMMY, Karloff delivers another wonderful performance.  His mummy is much more evil than the later depictions of a mute bandaged monster lumbering around the countryside strangling people.  Yet, Karloff also makes Im-Ho-Tep a somewhat sympathetic character.  We feel for the guy, and his plight to get his long lost love back.

But the best part of THE MUMMY is the cinematography and direction by Karl Freund.  Freund does a more impressive job at the helm of THE MUMMY than either of his more famous counterparts, Tod Browning directing DRACULA and James Whale directing FRANKENSTEIN.

Freund creates an unforgettable opening sequence of the mummy resurrected, a haunting and dreamlike flashback sequence (the scene where the slaves get spears thrust through their chests still makes me wince), and he imbues the scenes inside the museum with creepy shadows and mysterious lighting.

If there are any flaws, it’s the ending, which is quick and shot in a choppy clumsy manner, not at all like the rest of the movie.

So, as we make our way through the lazy hazy days of summer, grab a beverage, dig your toes into the sands of the Egyptian desert, and welcome Im-Ho-Tep into your living room.  Just don’t say the words of that ancient curse too loud.

One guy dying laughing is more than enough.