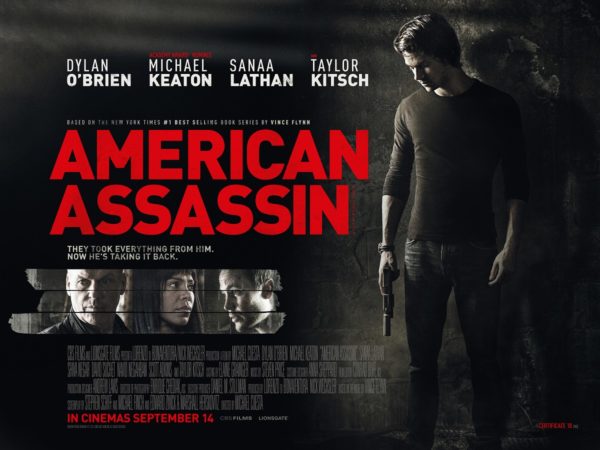 AMERICAN ASSASSIN (2017) is one of those movies that could have been so much better had it only been believable.

The trouble starts within the first few minutes of the movie.

Mitch Rapp (Dylan O’Brien) proposes to his girlfriend Katrina (Charlotte Vega) on a picture perfect beach, but moments later, terrorists shoot up the shoreline, wiping out countless people, including Katrina.  Devastated, Mitch decides to seek vengeance, and in a Rocky-like montage, Mitch trains himself to become— an assassin!  He’s actually training to be a terrorist, so he can infiltrate the secret terrorist cell responsible for murdering his fiance.

And he does all of this with relative ease.  So, before you can say “Jason Bourne,” he infiltrates the terrorist cell responsible for killing his girlfriend and even finds himself in the same room with the man responsible for giving the order.  How convenient!

But before Mitch can finish the job, the CIA intervenes, kills the terrorists, and whisks Mitch away.  Why?  To turn him into a CIA agent of course!  He’s sent to train under the rough and tough Stan Hurley (Michael Keaton) who sets out to break Mitch, but of course, you know how that turns out.  Mitch passes all the macho tests with flying colors.

The next thing you know Mitch is on Stan’s team and they’re in hot pursuit of some deadly terrorists who are intent on detonating a rather nasty bomb.  The man behind all the dastardly stuff is a shadowy figure known as Ghost (Taylor Kitsch), who it turns out, was trained by— you got it, Stan Hurley.  Ghost is the one who got away, the one who felt Stan betrayed him, and so now it’s up to Stan’s latest protegé, Mitch, to take on the old protege, Ghost.  Ten cents says you can figure out how that confrontation will turn out.

As I said, very little of this one is believable.

For starters, I simply did not buy Dylan O’Brien as Mitch Rapp.  O’Brien, who stars in the MAZE RUNNER movies, was chosen for the role specifically because he’s young, and there are plans to turn this movie into a film series since Mitch Rapp is a recurring character in a series of best-selling novels by Vince Flynn.

But I thought he was too young here.  The idea that he could stand up to Michael Keaton’s Stan Hurley was never believable.  O’Brien just was never convincing as a tough assassin.

On the other hand, Michael Keaton was very convincing as the rock solid Stan Hurley, but Hurley is not the main character here, and there’s only so much Keaton could do here to help this movie along.

Taylor Kitsch was sufficient at Ghost, but Shiva Negar delivered a more memorable performance as fellow agent Annika.  I liked the chemistry she shared with Dylan O’Brien.  This part of the movie was believable.

Likewise, Sanaa Lathan was also very good as CIA agent Irene Kennedy, the woman who recruits Mitch and then struggles to control him.

This one was written by four screenwriters.  Stephen Schiff, Michael Finch, Edward Zwick, and Marshall Herskovitz all worked on this screenplay adaptation of the novel by Vince Flynn, and they all have a decent number of writing credits, too.  It didn’t really seem to help all that much here, though.

Michael Cuesta directed with mixed results.  I liked the opening terrorist attack scene on the beach, which I thought was a jarring way to open the movie, but subsequent action scenes didn’t pack the same punch.

There’s a torture scene which isn’t as effective as it should have been.  When Ghost captures his former boss Stan Hurley, he tortures him for information, but the trouble is, Stan is just too tough for this sort of thing.  Michael Keaton has a field day in this scene which if it wasn’t so violent would have been comical.  Keaton follows each brutal method of torture with a wisecrack and a grunt.  Things get so bad for the villain Ghost that he nearly throws a hissy fit.

I went to see AMERICAN ASSASSIN specifically because I wanted to see Michael Keaton.  I knew going in that he wasn’t playing the lead, and he does a fine job in a supporting role. But truth be told, this one would have been much better had Keaton been playing a lead role.

I see lots of action movies.  The really good ones make you forget they’re telling an impossible story.  They’re convincing in their execution.  The lesser ones simply go through the motions.

AMERICAN ASSASSIN clearly falls into the latter category.  It expends little or no effort in convincing its audience that any of it could be true.