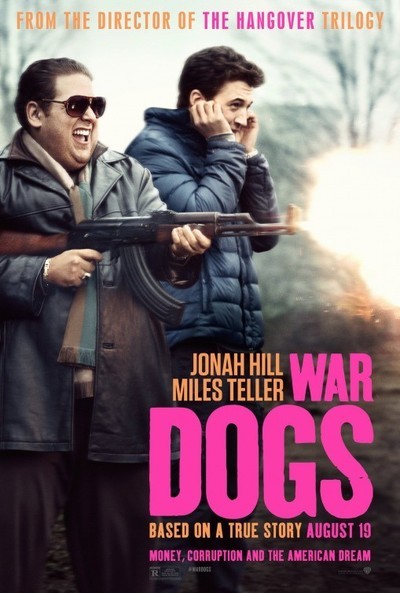 WAR DOGS (2016), the latest movie by HANGOVER trilogy director Todd Phillips, recounts the true story of friends David Packouz and Efraim Diveroli who became gun runners for the U.S. government during the Iraqi and Afghan wars.

The film opens with David Packouz (Miles Teller) lamenting that his life is going nowhere. He’s been working a thankless job as a professional massage therapist, and his business venture to sell bed sheets to nursing homes has fallen flat.  He does have a beautiful wife Iz (Ana de Armas) but once he learns she’s pregnant he fears he’s not going to be able to afford having a baby.

Enter his best friend from school Efraim Diveroli (Jonah Hill), who has returned to Florida to set up shop with his gun selling business.  Efraim takes David on as a partner, and he explains to David how his business works, that he has taken advantage of a plan set up by the Bush administration which allows small businesses to bid on U.S. military contracts. Efraim explains that most of the huge contracts still go to the large mainstream weapons manufacturers, but even with the “crumbs” as Efraim calls them, you can still make a lot of money.

And they do.  Within the first few months of working with Efraim, David is earning close to $300,000.  And things only get more lucrative for them, especially after they travel to Iraq to personally deliver a truckload of Italian made berettas to the U.S. military, driving through a dangerous stretch of land known as “the triangle of death”  to do it.  After this stunning delivery, their reputation begins to grow.

They travel to Las Vegas to a weapons convention which Efraim calls “Comic Con with guns” and they decide to go all in as they try to secure their largest deal yet, as they learn that the U.S. military is attempting to arm the entire Afghan army.  The job proves too large for them, until they attract the attention of the infamous and uber shady arms dealer Henry Girard (Bradley Cooper) who tells them he can get them all the ammo they need to pull off the deal, as it’s stashed away in Albania where the Albanian government is desperately trying to sell off its stockpile of ammuntion.  Girard tells them he can’t do the job himself since he’s on a terrorist watch list.

Efraim and David agree to work with Girard, and they pull off their largest sale ever, earning them millions of dollars.  Of course, they also enter illegal territory here, which eventually attracts the attention of the U.S. government.

As I said, WAR DOGS was directed by Todd Phillips, the man who directed the three HANGOVER movies, but don’t let this connection mislead you.  WAR DOGS really isn’t a comedy.  Sure, there are parts that you will laugh at, but for the most part its a gritty captivating drama about the shady world of gun running during the Iraqi war.

As such, I really liked WAR DOGS.  The story works, thanks to sharp screenplay by director Phillips, Stephen Chin, and Jason Smilovic.  It tells a riveting story, has some memorable lines, and does a nice job with the characterizations.

Sadly, we’ve been stuck fighting wars in Iraq and Afghanistan since the early 2000s, but one positive—if you can call it that— that has come from this period is that it has provided a canvas for some pretty good movies.  A lot of stories, nearly all of them tragic, have come out of these wars, and filmmakers have done an admirable job telling them, with films like AMERICAN SNIPER (2014) and THE HURT LOCKER (2008).  You can add WAR DOGS to this list.

Both Miles Teller and Jonah Hill do fine jobs here.  Teller has starred in the DIVERGENT series and the recent reboot of FANTASTIC FOUR (2015) as a very young Reed Richards, and of course he received high praise in the Oscar winner WHIPLASH (2014).  He’s excellent again here.  He’s perfect in the role, making David the everyday “normal” guy who gets involved with his best buddy’s shady business dealings for the right reasons- to support his wife and baby- and who sticks to his guns–heh heh– when things go south and refuses to throw out his principles.

While Jonah Hill is mostly known for his goofy comedies, he’s already shown acting chops in such films as MONEYBALL (2011) and THE WOLF OF WALL STREET (2013) so I’m not sure if this is his best performance yet, but it’s certainly a good one.  In fact, Hill is clearly the best part of this movie.

He makes Efraim volatile, unpredictable, and a hoot to watch.  As David explains, Efraim’s gift is he can make himself into the exact person that the person he’s trying to con wants him to be. As such, you can never trust him.  Hill is great at capturing this part of Efraim.  He also gained a lot of weight for the role, and he really becomes this character.

And Bradley Cooper is actually very good in a small role as the shadowy arms dealer Henry Girard.  Sometimes when major actors appear in small roles you’re left wondering why?  Not the case here, as Cooper gives this guy a demeanor that makes you actually like him.

Director Todd Phillips also gives us some memorable scenes, like the suspenseful trek across the Triangle of Death.  I also liked the scene just before this sequence when David and Efraim have to negotiate with the help of a young boy translator to get their weapons into Iraq.  The scenes in Albania were also sufficiently gloomy.

All in all, I really liked WAR DOGS, a captivating and entertaining film that plays like a cross between THE WOLF OF WALL STREET and AMERICAN SNIPER.

Its story of how David and Efraim were able to weasel their way into the lucrative cutthroat world of weapons distribution  for the U.S. government and actually become major players in the arms dealing business will leave you shaking your head,  questioning just how it was that the government encouraged this to happen in the first place. 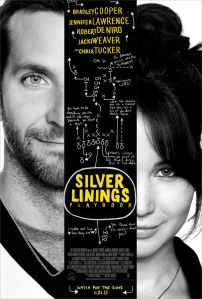 When is it too late to see a movie at the theater?  Why, never of course!

We’ve gotten so used to seeing movies on their opening weekends, it’s not uncommon to hear someone say, “I don’t want to see it.  It’s been out too long.  I’ve already heard too much about it.”  I say, it’s never too late to see a movie on the big screen.

Take SILVER LININGS PLAYBOOK (2012), for example.  It was one of those movies which I’d missed- it had fallen through the cracks- but I really did want to see it on the big screen, so I ventured out on a recent Thursday night- the last night the film was scheduled to play in my area- and watched it with one other person sitting in the theater with me.

Was it as an exhilarating experience as catching it in an opening night theater abuzz with a loud and energetic opening night crowd?  No, I can’t say that it was.  Had I heard more than I wanted about the movie already?  Sure.  But that didn’t take away from my enjoyment of seeing the film on the big screen.

Pat (Bradley Cooper) is released from a stint in a mental institution, ordered there by a court to deal with anger issues after he had found his wife in the shower with a co-worker and beat the co-worker nearly to death.  Pat also suffers from bi-polar disorder.  He’s taken home by his mother Dolores (Jacki Weaver) where he’ll live temporarily with her and his dad Pat Sr. (Robert De Niro).

He develops a friendship with the quirky sex-addicted Tiffany (Jennifer Lawrence) but barely notices her because he’s determined to the point of obsession of winning his wife back.  But Tiffany is persistent, and when she offers to help Pat get back together with his wife, by delivering a letter to her, which he can’t do since there’s a court order for him to avoid all forms of contact with her, he begins to pay Tiffany attention, and when she convinces him to take part in a dance competition with her, their relationship deepens, to the point where you really want to see them overcome their obstacles and get together.

SILVER LININGS PLAYBOOK is a poignant story, often disturbing, sometimes funny, about second chances in life, about seeing the positives in spite of all the negatives, and about connections people make and whether or not these connections can survive the muck of human existence that gets in the way of relationships.

I’ve become a big fan of Bradley Cooper, from his humorous turns in THE HANGOVER movies to more dramatic roles in LIMITLESS (2011).  He’s great here once again, making a complicated man like Pat very sympathetic and likeable.

Jennifer Lawrence really does steal the show here as Tiffany, and her Oscar win for Best Actress was well deserved.  I really enjoyed her in THE HUNGER GAMES (2012) but she’s so much better here.  As Tiffany, she delivers a powerhouse performance, creating a woman who’s explosive, volatile, and strong, one who is able to cut through all the distractions and problems in Pat’s world and make him pay attention.  You’ll be paying attention too.

Robert De Niro, as the OCD suffering Pat Sr., delivers one of his most satisfying performances in years. He cares deeply for his son, yet he can’t seem to do right by him, as he’s constantly losing his patience around him.  Yet De Niro is very likeable as Pat Sr., and enjoys a key scene late in the game where he finally says the right thing at the right time.

Jacki Weaver is also memorable as Dolores, and Chris Tucker shines in a supporting role as Danny, Pat’s friend from the institution who keeps showing up at Pat’s door saying he’s been allowed out when he’s really escaped.  Anupam Kher is also a hoot as Dr. Cliff Patel, Pat’s therapist.

SILVER LININGS PLAYBOOK was written and directed by David O. Russell, and his screenplay was based on the novel by Matthew Quick.  The fact that it’s based on a novel comes as no surprise because this one plays like a novel, with deep, rich characters who are more complicated and fleshed out than your typical movie character.

SILVER LININGS PLAYBOOK is a thoroughly satisfying movie from start to finish.  It has great acting and a thought-provoking emotional story that grabs you from the outset and takes you along for an entertaining ride.  I’ve heard many people grumble that it shouldn’t have been up for Best Picture, but I’m glad it was nominated.

I enjoyed its story about characters who really have to work hard to succeed in their relationships.  These folks all have baggage, hang-ups, and difficulties.  They strive for happiness and they struggle to treat those around them, family and friends, the way they want to.  They want to treat them well, but more often than not, they don’t.  SILVER LININGS PLAYBOOK presents us with characters like ourselves, stuck in struggles we often feel powerless to overcome, yet always with the desire to make connections with others and to do right by those we know and care for.

SILVER LININGS PLAYBOOK  is a movie that tells the truth about flawed people and their relationships.  Yet it’s not a downer by any means.  Sure, there are parts that are painful to watch, but for the most part, the humor works to offset the hopelessness.

We root for these folks, and we want to see them succeed even though we know the road to happiness is paved with pain and uncertainty.  Anything less would just be a silver lining.