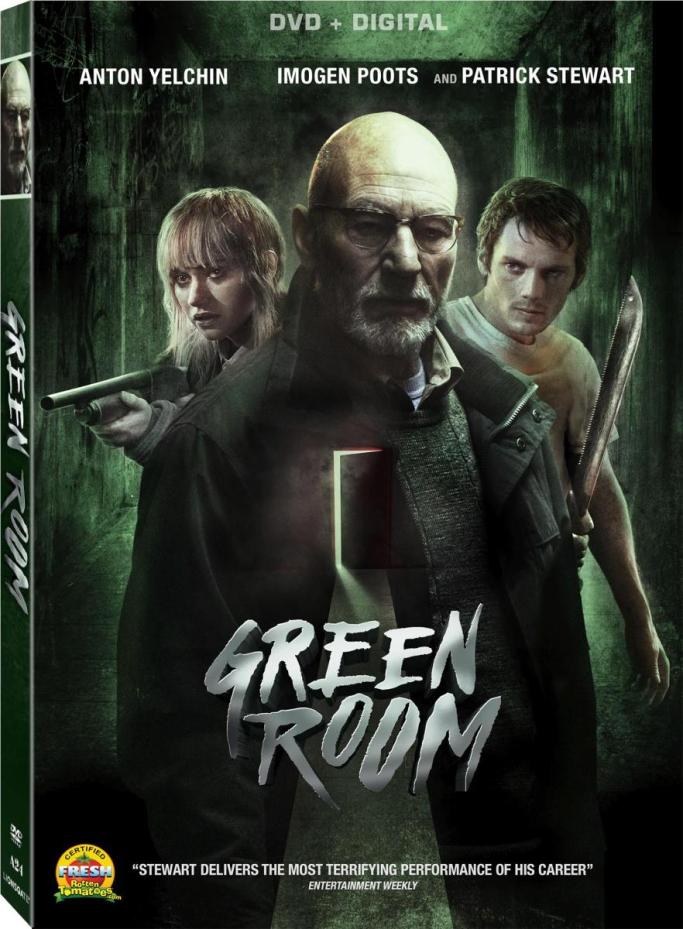 When this year’s Oscar winner for Best Picture, GREEN BOOK (2018) was first released, I remember thinking, gee, that title is awfully close to GREEN ROOM. I wouldn’t want to be that person who mistakenly chose to watch GREEN ROOM when they meant to watch GREEN BOOK. They’re two very different movies. The person making that mistake would be in for quite a shock.

GREEN ROOM is a violent, visceral thriller that got under my skin and provided me with 95 minutes of horrifically intense entertainment.

GREEN ROOM is the story of a punk rock band whose members agree to accept a gig at a neo-Nazi skinhead bar. Their performance doesn’t go all that well— no, they’re not attacked because they played bad music, but they do run afoul of murder when they walk into the green room and find two people standing over the body of a dead woman, a knife jammed into her head. Before they can react, they are locked in the room and held hostage by bouncers at the bar.

The bar’s owner Darcy (Patrick Stewart) arrives with a plan to make the crime go away, a plan that includes pinning the murder on the visiting band. This doesn’t sit well with the band, who decide to fight back, which is no easy task since they’re surrounded by people with weapons and vicious dogs who enjoy ripping people’s throats out.

What follows is a brutal and  suspenseful tale of the band’s fight for survival against a horde of murderous neo-Nazis led by the level-headed Mr. Darcy.

I really enjoyed GREEN ROOM. I was hooked within the film’s first few minutes. Writer/director Jeremy Saulnier immediately captures the personality and mood of the punk rock band, known as The Ain’t Rights. The opening plays like a rock documentary, and once the band gets to the skinhead bar, things become sketchy first and then downright deadly.

And once that happens, once they discover the body of the murdered girl and get trapped inside the green room, all bets are off. What follows is an intense thrill ride that will give you sweaty palms for the remainder of the film.

GREEN ROOM features the late Anton Yelchin in the lead role as Pat, the band member who takes the lead in their fight for survival. In real life, Yelchin tragically died in a bizarre accident in which his Jeep Grand Cherokee rolled down his steep driveway and pinned him against a wall, killing him, on June 19, 2016. Yelchin was a tremendous talent and had already enjoyed enormous success in his young career, playing Chekov in the rebooted STAR TREK movies starring Chris Pine,  and he played Charley Brewster in the remake of FRIGHT NIGHT (2011) and Kyle Reese in TERMINATOR SALVATION (2009).

Yelchin is excellent here as Pat. At first, he’s not the character you expect to become the leader, especially since early on he almost dies, but his resilient spirit grows as the story goes along.

Imogen Poots is also memorable as Amber, the young woman who’s found standing over the dead girl with the knife in her head. I like Poots a lot. Interestingly enough, she also starred in the remake of FRIGHT NIGHT as Amy.

Also in the cast is Joe Cole, who plays John Shelby on the TV show PEAKY BLINDERS (2013-17). I also enjoyed Macon Blair as Gabe, one of the bouncers who actually develops a conscious as the plot unfolds.

But for my money the best performance in GREEN ROOM belong to Captain Jean-Luc Picard himself, Patrick Stewart as club owner Darcy. Stewart, of course, played the Enterprise captain on STAR TREK: THE NEXT GENERATION (1987-1994) and in the four NEXT GENERATION STAR TREK movies. And, he’s set to reprise the role of Captain Picard in an upcoming Star Trek TV series which is as of yet untitled. Not to mention his portrayal of Professor Charles Xavier in the X-MEN movies, a role he played most recently in LOGAN (2017) with Hugh Jackman.

As Darcy in GREEN ROOM, Stewart is calm and cool, the complete opposite of everyone else in the movie. As such, Stewart makes Darcy a chilling adversary, someone who doesn’t think twice about the deadly decisions he makes. He’s cold, calculating, and ultimately a bad ass.

For me, watching Stewart was the best part of GREEN ROOM.

There are also some truly frightening scenes in this one, from hands being grotesquely mutilated to deathly choke holds, to murder with box cutters, to man-eating dogs. Gulp!

This is one movie you don’t want to watch on a full stomach. Yet, it is much more than just a gore fest. In fact, it’s not very gory at all. Most of the violence occurs in quick fashion in swiftly edited scenes, which only adds to the frenetic pace of the film.

Writer/director Jeremy Saulnier also creates sympathetic characters who you care about and want to see survive, feelings that are heightened by the fact that the chances of their survival are so slim.

GREEN ROOM is a first-rate thriller and horror movie. No, it’s not the one that won Best Picture—that’s GREEN BOOK— but it is the one that will leave you green with revulsion.