Boris Karloff as the Frankenstein Monster in FRANKENSTEIN (1931)

Karloff made over 70 movies before playing the Monster in FRANKENSTEIN (1931), the film which changed his career and made him a household name.  He would reprise the role twice, in THE BRIDE OF FRANKENSTEIN (1935) and SON OF FRANKENSTEIN (1939), and of course would go on to make a ton of horror movies over the next four decades, from the 1930s to the 1960s.

To celebrate his birthday, here’s a look at a handful of Karloff’s most memorable horror movie performances:

FRANKENSTEIN (1931) – The Monster- there’s a reason this role turned Boris Karloff into a star.  His Monster is both brutal and sympathetic.  Insanely powerful, he can kill in a heartbeat, and yet this newly born creature is simply terribly misunderstood and maltreated.  With a remarkable make-up job by Jack Pierce, no movie Frankenstein monster has ever looked as much like a walking corpse as this one.  If you only see one Boris Karloff movie in your life (which would be shame- see more!) see FRANKENSTEIN.

THE MUMMY (1932) – Imhotep – For my money, Karloff’s interpretation of Imhotep remains the most effective movie mummy performance of all time.  There still has not been another one like it.  In spite of a plot that is very similar to DRACULA (1931), THE MUMMY is a superior horror movie, and Boris Karloff’s performance as Imhotep is a major reason why.

THE BLACK CAT (1934) – Hjalmar Poelzig – In this classic first-time pairing of horror icons Boris Karloff and Bela Lugosi, Karloff plays the devil worshipping Hjalmar Poelzig, pitted against Bela Lugosi’s heroic Dr. Vitus Werdegast.  Superior horror film has little in common with the Poe tale on which it is so loosely based, but it has a top-notch script full of classic lines, and it features two performances by Karloff and Lugosi in their prime, doing what they do best.  Best watched late at night with the lights out. 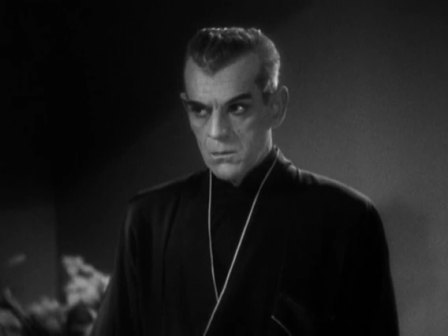 BRIDE OF FRANKENSTEIN (1935) – The Monster- The Monster speaks!  So boasted this movie’s tagline, and it’s true, Karloff’s monster learns to speak in this classic sequel to the iconic original.  Critics consider BRIDE to be the best FRANKENSTEIN movie of all time, but I still slightly prefer the original, if only because it remains much scarier.  But Karloff takes his performance as the Monster here to another level.  It’s arguably the best performance of the Frankenstein monster of all time.

THE BLACK ROOM (1935)- Baron Gregor de Berghman/Anton de Berghman – Karloff has a field day in a dual role as twins, one good, one bad.  Karloff delivers one of his best performances in this little known period piece horror drama.  Look fast for an uncredited Edward van Sloan as, of course, a doctor.

THE BODY SNATCHER (1945) – John Gray – Another superb Karloff performance.  He plays John Gray, the body snatcher who robs graves for Dr. “Toddy”  MacFarlane (Henry Daniell). Based on a short story by Robert Louis Stevenson and the real life story of Dr. Knox and grave robbers Burke and Hare.  Produced by Val Lewton and directed by Robert Wise. Horror film making at its best.  Also features Bela Lugosi in a small supporting role.

ISLE OF THE DEAD (1945) – General Nikolas Pherides- Karloff plays a hawkish general who uses his ruthless methods to protect a group of islanders who believe they are being hunted by a vampire-like creature in this intriguing well-made chiller by producer Val Lewton.

BLACK SABBATH (1963) – Gorca – Karloff is at his scary best in this horror anthology by Mario Bava.  Karloff appears as a “Wurdalak” or vampire, and he’s downright frightening.  This is the only time Karloff ever played a vampire in the movies.

So, there you have it, just a few of Boris Karloff’s more memorable horror movie roles. To celebrate his birthday, you can’t go wrong watching these or any of Karloff’s 205 screen credits, for that matter. 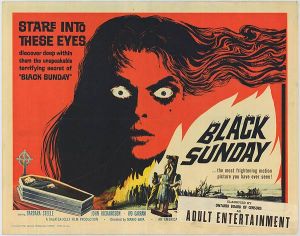 Here’s my latest IN THE SPOOKLIGHT column, on the Mario Bava classic BLACK SUNDAY (1960), published in the November 2014 edition of The Horror Writers Association Newsletter.

BLACK SUNDAY (1960), Mario Bava’s classic horror movie about vampires and witches, is so steeped in atmosphere you’ll swear your living room has been transformed into a graveyard right before your eyes.

Take the opening pre-credits scene for instance, where Barbara Steele’s witch Princess Asa is condemned to death, by her own brother, no less.  Torches, dead trees, fog, and the kicker, the mask with the spikes inside— the mask of Satan, which actually is the film’s American title on some prints- which the big burly executioner slams into Steele’s face with a mallet. Ouch!

Of course, before she gets those giant spikes driven into her skull, she swears that she’ll return from the dead to seek vengeance on her brother’s descendants.

The story then jumps two hundred years into the future, into the 19th century where we meet doctors Kruvajan (Andrea Checchi) and Andre Gorobec (John Richardson).   They’re on their way to some 19th century conference— on how to tell whether someone is a witch, perhaps?— when their coach has an accident, and they find themselves at a graveyard with some free time on their hands.

They discover the coffin containing the remains of Princess Asa, and Kruvajan knows about the legend and tells Andre all about it.  Moments later, Kruvajan is attacked by a giant bat, and in his struggle to defend himself, he cuts his hand, and some of his blood falls onto the body of the princess.  Blood dripping onto the body of a witch, vampire, or a demon is never a good thing [we just saw this same plot device used in the new movie ANNABELLE (2014) as dripping blood gave life to the evil spirit inside its demonic doll], and it’s certainly not here, as in the words of Dracula himself, “the blood is the life,” and having received a splash of Kruvajan’s blood, Princess Asa begins to stir from her long sleep.

Asa uses her powers to resurrect her former lover, the vampire Javutich (Arturo Dominici) and together they set their sights on seeking vengeance against Asa’s descendants, including young princess Katia (also played by Barbara Steele).  They also go after Dr. Kruvajan, which means it’s up to young Andre and the parish priest to battle the forces of evil and stop Asa and Javutich from completing their diabolical plan.

There’s a lot to like about BLACK SUNDAY, but the main reason I enjoy this film so much is the atmospheric direction by Mario Bava.  The black and white photography here is so impressive you’ll forget you’re watching a horror film.  It’s practically an art house experience.

BLACK SUNDAY is chock-full of memorable scenes and images.  It gets off to a shocking start with its opening sequence of the mask being driven into Princess Asa’s skull, and from there it never looks back.  There’s also a gruesome scene where Andre and the village priest drive a spike into a vampire’s eye.

The main star here is Barbara Steele, and she’s sufficiently sexy in her dual role as Princesses Asa and Katia.  I prefer her as the evil witch Asa, as she comes off as icy cold and devilishly wicked.

But my favorite character in BLACK SUNDAY is the vampire Javutich, who is a foreboding and menacing presence throughout.  Javutich as played by Arturo Dominici is certainly one of the scarier screen vampires.  I wouldn’t want to wake up and find him standing by the edge of my bed.

The rest of the cast are all rather bland, including John Richardson as the romantic lead Dr. Andre Gorobec.  Of course, the English dubbing doesn’t help.  The actors all sound like characters in a Scooby Doo cartoon.  Not very convincing. BLACK SUNDAY is an Italian production, and I’ve always wanted to see it in its original Italian language with English subtitles, but sadly I’ve only seen the English dubbed version.

BLACK SUNDAY tells a decent story with plenty of scares and thrills and does a nice job with its mixture of witches and vampires.  It’s the perfect horror movie to watch late at night alone in the dark.

Not into Black Friday this Thanksgiving?  Then try BLACK SUNDAY, and join doctors Kruvajan and Gorobec as they battle the witch Princess Asa and her vampire lover/assassin Javutich in castles and graveyards, all shot in glorious haunting black and white.

I’ll take one of those masks with the spikes, please.  Is the mallet extra?