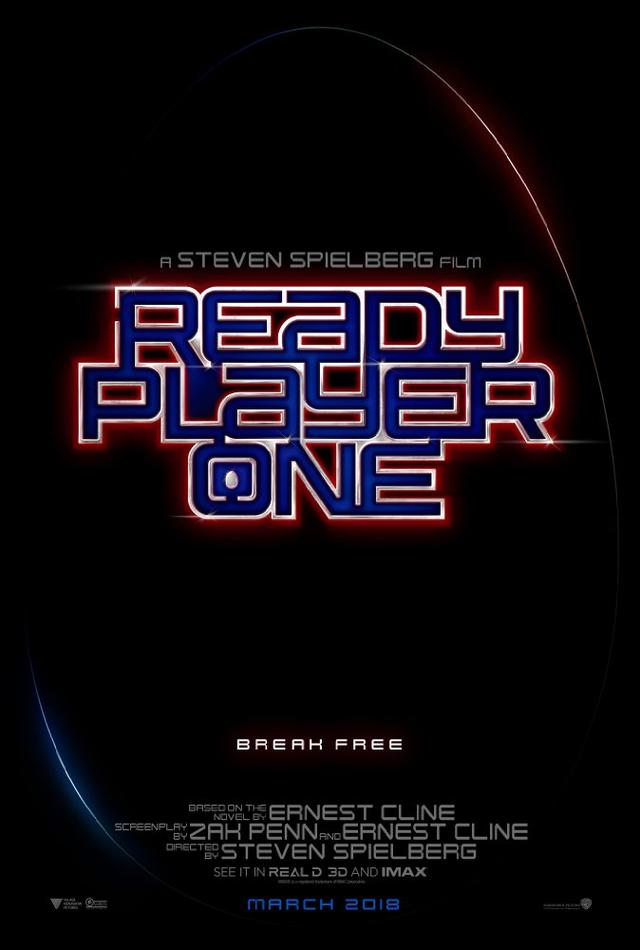 I’m not a gamer. I don’t play video games, and I haven’t read the book  Ready Player One by Ernest Cline, and so my interest in seeing READY PLAYER ONE (2018) the new fantasy adventure by director Steven Spielberg, was purely for cinematic reasons.  That’s right. I saw this one simply because I wanted to see the movie.

So, as a movie, how does READY PLAYER ONE size up? Not bad.  For the most part, it’s a fairly entertaining two-plus hours at the movies, even if it’s telling a story that is about as compelling as a game of Donkey Kong.

The best part of READY PLAYER ONE is all the cultural cinematic references. After all, where else can you find King Kong, MechaGodzilla, and the Iron Giant all in the same movie?  Where else can you have your characters enter a world based on Kubrick’s THE SHINING (1980)?  The answer is READY PLAYER ONE! These and other references and nods [including to ALIEN (1979) and LOST IN SPACE (1965-68)]  are what kept me most interested in this movie, long after I lost interest in its story.

Wade Watts (Tye Sheridan) lives in 2045, a time when life is so hard people need to escape from reality, and they do so by entering the OASIS, a virtual reality world created by the brilliant James Halliday (Mark Rylance) where pretty much anything can happen. You can be whoever you want to be and do whatever it is you want to do. So, Wade plays in this video game world as a handsomer version of himself known as Parzival.

Halliday has since died, but he’s left a challenge to all the players in the OASIS: he has left three keys inside his virtual reality world, and the player who finds all three keys will unlock the game’s secret and become controller of the entire OASIS.  Wade and his friends make it their goal to do just that, but they’d better hurry because an evil company led by a man named Sorrento (Ben Mendelsohn) has other ideas.

And that’s the story.  This one’s certainly not going to win any awards for Best Screenplay, that’s for sure.

Visually READY PLAYER ONE is a lot of fun, and Spielberg keeps the action fast, bright, and playful.  I have no problem with this part of the movie.

The cast is okay, even though they don’t have a whole lot to work with. Tye Sheridan is decent enough in the lead role as Wade/Parzival, but the character as written in this movie is rather dull, and Sheridan doesn’t really bring this young man to life.  Both his parents have died, yet this grief barely resonates in the story.

Olivia Cooke fares better as Samantha, who becomes Wade’s best friend and eventual love interest.  Samantha is also a kick-ass character who is much more interesting than Wade.  I like Cooke a lot and have been a fan since I first saw her on the TV series BATES MOTEL (2013-17) and also in the Hammer horror movie THE QUIET ONES (2014).

Ben Mendelsohn plays the cardboard villain Sorrento who acts like he walked out of an old Scooby Doo cartoon.  Mendelsohn played a much more effective villain, Orson Krennic, in ROGUE ONE: A STAR WARS STORY (2016).

I did enjoy T.J. Miller as Sorrento’s henchman I-ROk, as he provides the film’s best bits of comic relief.  Miller was recently in DEADPOOL ((2016), but I always remember him as Hud, the frightened yet frequently hilarious guy behind the camera in CLOVERFIELD (2008).

Mark Rylance, either hidden under lots of hair or CGI effects in the OASIS, is quiet and unassuming as the gaming genius Halliday, but Simon Pegg as Halliday’s business partner Ogden Morrow is little more than an afterthought.  These two fine actors really don’t get a whole lot of chances to do much in this movie.

The screenplay by Zak Penn and Ernest Cline, who wrote the novel, is straightforward and pretty much tells a by-the-numbers plot.  Teens have to save the world from an evil meddling company while learning about the man who created their favorite game and about themselves as well.

At times, the film feels like a cross between TRON (1982) and WILLY WONKA AND THE CHOCOLATE FACTORY (1971). In fact, it’s been reported that Spielberg had approached Gene Wilder to play Halliday, before the iconic comedic actor passed away.  Its nonstop video game landscape is mixed with a syrupy sweet nostalgia tale that makes for lightweight fare, as opposed to a hard-hitting fantasy adventure.

There’s not a lot of memorable dialogue either. And the action scenes, while visually stunning, were pretty tame.

READY PLAYER ONE is chock-full of fun cinematic, video game, and cultural references, especially from the 1980s, and it’s a treat for the eyes, as it’s full of colorful alternate reality landscapes, but its story is meh and often falls flat.  For example, for nearly its entire 140 minute run time, we are immersed inside its virtual reality world, yet at the end, we are treated to a message that says the real world is still more important and interesting, which after all that came before it simply sounds hollow and forced.

READY PLAYER ONE is a colorful diversion if you have 140 minutes to spare.  If not, feel free to spend some time outside instead.  In the real world.