Here’s my latest IN THE SPOOKLIGHT column on the science fiction flick ROBINSON CRUSOE ON MARS (1964).

We venture into the realm of science fiction today IN THE SPOOKLIGHT as we pay a visit to ROBINSON CRUSOE ON MARS (1964).

ROBINSON CRUSOE ON MARS is not the best science fiction movie to come out of the 1960s, but it is certainly one of the best intentioned. Think THE MARTIAN (2015) with a smaller budget and less science.  A lot less science!

Two astronauts on a mission to Mars, Colonel Dan McReady (Adam West) and Christopher Draper (Paul Mantee) run into trouble with an asteroid and are forced to jettison from their ship in escape pods which land on Mars.  Draper survives, along with a monkey, but McReady is killed.

With only the monkey for companionship, Draper has to find ways to survive on the desolate planet while at the same time trying to find a way to get home.

One of the first things Draper does once he steps out of his escape pod is take off his space helmet.  Hmm.  Not a good idea!  But  like I said, the science isn’t exactly strong in this movie.  Draper discovers that he can indeed breathe on Mars, but only for brief periods of time, so he still he needs his oxygen supply, which obviously is limited.  But  lucky for Draper, he discovers certain rocks on the planet that provide him with air!  How about that!  Air from rocks!  Just hold up a stone to your nose and mouth and breathe in!  Hmm. This is starting to sound like GILLIGAN’S ISLAND ON MARS!  Gee, Professor, how does the air come from these rocks?   Well, Gilligan, the oxygen inside these stones is released when—.

Draper also has a limited food supply, but not to worry, he soon discovers an edible plant that looks an awful lot like a sausage.  Even better, there are plenty of these for him to eat.  But then again, he needs water.  He can’t survive without water.  But alas!  He discovers an underground cave that is full of water!  Drinkable water to boot!

He sure is lucky.  Maybe this should be called BUGS BUNNY ON MARS.

One day, Draper’s peace of mind is interrupted when spaceships descend upon his Martian neighborhood, spaceships that deposit a bunch of humanoid slaves on the ground so they can mine Martian ore.  One of these slaves escapes and befriends Draper.  Draper promptly names his new friend Friday, after the character in the Daniel Defoe novel ROBINSON CRUSOE.  Together, they continue the fight for survival.

Now, I poke fun here at ROBINSON CRUSOE ON MARS because the science in this film is laughable, but that’s about it.  The rest of the movie is surprisingly good.  Sure, it has low budget special effects, but its color cinematography is nothing to laugh about.  There are actually some nifty looking and very colorful scenes of the Martian landscape.  So, visually the film is fun to look at.

And Paul Mantee, who spends most of the film alone and thus talks to himself throughout, is very good and makes for a likeable hero who you really root for and want to see survive.  He pretty much carries the movie and does it with ease.  He remains entertaining throughout. 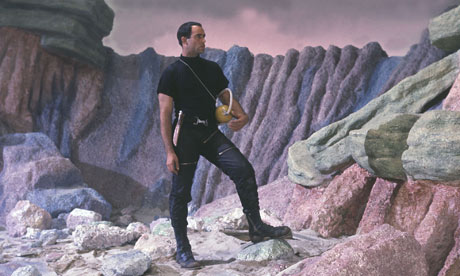 The real culprit in this one is the writing which comes off as science fantasy.  There’s nary a realistic bone in this one’s body.

The screenplay was written by Ib Melchior and John C. Higgins, based of course on Daniel Defoe’s novel.   Melchoir is no stranger to genre movies.  He penned the screenplays to THE ANGRY RED PLANET (1959), REPTILICUS (1961), JOURNEY TO THE SEVENTH PLANET (1962), THE TIME TRAVELERS (1964), and PLANET OF THE VAMPIRES (1965).  Plus he also wrote the screenplay for the American version of the second Godzilla movie, GODZILLA RAIDS AGAIN! (1955).

While the spaceship effects throughout the movie are cartoonish and certainly do not hold up today— they were subpar even by 1960s standards- they’re still fun.  And the ship zooming through space in the film’s opening is clearly reminiscent of the way the starship Enterprise zipped across TV screens in the opening credits of the original STAR TREK television show, and it pre-dated STAR TREK by two years.

There are also some pretty cool looking fireballs which streak across the Martian landscape whenever they feel like it.  And that Martian landscape is as colorful as it gets.  Think STAR TREK and LOST IN SPACE sets, and you’ll have an idea of what to expect from this one, in terms of its production values.  Low budget, but respectable.

ROBINSON CRUSOE ON MARS is also notable for featuring a pre-BATMAN Adam West in the cast, even if it is only for a few minutes.  West became typecast so quickly, that seeing him play someone other than Batman is a rare treat indeed.

ROBINSON CRUSOE ON MARS is not the most realistic science fiction movie you’ll ever see, but it is certainly one of the more entertaining.

Doing any stargazing this summer?  If you point your telescope at Mars and look closely, and you see a man sucking air from a rock and eating plants shaped liked sausages, that’ll be ROBINSON CRUSOE ON MARS.  I hear he’s mighty lonely up there.  Why don’t you drop by and pay him a visit?

—If you enjoyed this column, you might enjoy my IN THE SPOOKLIGHT book, a collection of 115 IN THE SPOOKLIGHT columns, available as an EBook at neconebooks.com, and also as a print-on-demand edition.  Check out the “About” section of this blog for ordering details.—