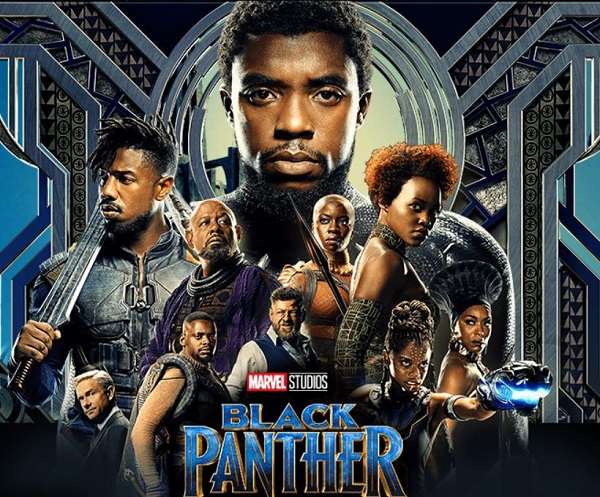 10. BOOK CLUB – I really enjoyed this comedy starring Diane Keaton, Jane Fonda, Mary Steenburgen, and Candice Bergen about four friends who decide to read 50 Shades of Grey for their monthly book club, and it changes the way they think about sex and relationships during their senior years. Also starring Andy Garcia, Don Johnson, Richard Dreyfus, and Craig T. Nelson. My favorite comedy of the year.

9. WON’T YOU BE MY NEIGHBOR?  – in a banner yeary for documentaries, this one was my favorite. Its recounting of the life of Fred Rogers, TV’s Mister Rogers from Mister Rogers’ Neighborhood, resonates deeply today, as Rogers’ message of inclusion and gentle understanding is sorely missed in today’s antagonistic and deeply divided society.

8. ANT-MAN AND THE WASP – I enjoyed this Ant-Man sequel more than the original. Story is better, jokes and situations are funnier, and Evangeline Lily adds a lot as the Wasp and is a nice complement to Paul Rudd’s Ant-Man. Oh, and then there’s that after-credits tie-in with AVENGERS: INFINITY WAR which produced audible gasps from the audience.

7.BOY ERASED – Joel Edgerton wrote and directed this film which exposes gay conversion theory for the dangerous procedure that it is. Fine performances by Lucas Hedges, Nicole Kidman, and Russell Crowe, and by Edgerton himself as an unqualified leader of the conversion camp.

6. THE FRONT RUNNER – Sure, I’m partial to political movies, but this tale of Gary Hart’s fall from being the Democratic front runner in the 1988 presidential election to dropping out of the race entirely due to an exposed extra-marital affair pushed all the right buttons for me. The film asks relevant questions which are still being asked today. Hugh Jackman is terrific as Gary Hart, as is Vera Farmiga as his suffering wife Lee.

5. EIGHTH GRADE – Awesome film which completely captures what it is like to be an eighth grader. On target writing and directing by Bo Burnham, especially the dialogue, and a fantastic lead performance by Elsie Fisher as eighth grader Kayla Day.

4. THE GUILTY – From Denmark, this claustrophobic intense police drama is as compelling as they come, the type of film Alfred Hitchcock would have made. All of the action takes place inside a police dispatch office as an officer relegated to the emergency dispatch receives a call from a woman being kidnapped, and he has to deal with the situation in real time. You’ll swear you’ve seen all the action scenes, but that will be your mind playing tricks on you, as the camera remains focused on the police officer throughout. Excellent movie, and lean, as it clocks in at a swift 85 minutes.

3. AVENGERS: INFINITY WAR – It was an outstanding year for Marvel, as three of my top ten films this year come from the Marvel Universe. This was the biggie, the ultimate showdown between the Avengers and their most dangerous adversary yet, Thanos. Amazing superhero movie, with a big bold ending which is no longer a spoiler, which is, the bad guy wins in this one. One of the most emotional endings to any superhero movie, causing audible gasps and groans multiple times as the film races to its inevitable conclusion. 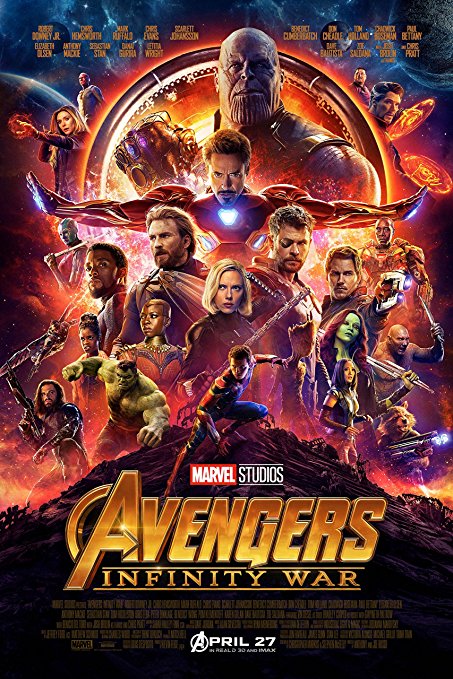 2. ROMA – An extraordinary movie, ROMA was unlike any other film I saw this year. Unassuming simple tale of a maid working for a family in Mexico in 1970-71. Features some of the best camerawork of the year, all of it in mesmerizing black and white. Slow at first, but stick with it. The final 45 minutes is among the most emotional moments on film I saw all year.

1. BLACK PANTHER –  My pick for the best movie of the year is another Marvel gem. This one takes the superhero movie to a whole other level, dealing with racial issues as well as any mainstream drama. My favorite superhero film since THE DARK KNIGHT (2018). I loved the conflict between hero Black Panther (Chadwick Boseman) and villain Erik Killmonger (Michael B. Jordan),and one of the rare times in a superhero movie where the hero admits he’s wrong and the villain is right.  Outstanding in every way, easily my favorite movie of 2018.

Unpretentious, and seemingly effortless in the making, it offers a slice of life look at a young maid who works for a Mexican family in the neighborhood known as Roma during 1970-71. It’s as authentic a movie as you will ever find in that you’ll forget you’re watching a movie as you will be absorbed in the daily life of this woman and the family she serves, and the beauty of it is, after over two hours of what can only be described as a slow-moving story arc, you will not want it to be over.  You’ll want to watch another two hours plus of what happens to these people. That’s how good this movie is.

ROMA was written and directed by Alfonso Cuaron, who won the Best Director Oscar for his work on the science fiction movie GRAVITY (2013), a film I enjoyed a lot. ROMA is a better movie than GRAVITY. It’s also a more personal one for Cuaron, who tells a tale that is largely autobiographical, based on his upbringing in Mexico, about the love he as a child and the rest of his family shared for their maid who as shown in the movie is more than just hired help. Since she is largely responsible for raising the children, she’s also part of the family.

ROMA tells the story of Cleo (Yalitza Aparicio) a young maid who works for a Mexican family inside a rather wealthy home. The parents, a doctor and his wife, are having marital problems, and the doctor soon moves out of the home. We see Cleo’s day-to-day activities, all the work she does, including cooking, laundry, picking the kids up from school, and cleaning up after the dogs. Indeed, dog poop is a central metaphor in this movie. Here is a family that should be happy, and indeed they seem to be, but life is a grind, and even if you work hard at it, poop still piles up. Yup, sh*t happens.

We watch as Cleo goes out with her friends and a young man she likes, and she soon becomes pregnant. A common theme in the film is the abandonment of women by men, and so the father of Cleo’s baby not only wants nothing to do with her, but threatens her if she ever comes to see him again.

Amid the backdrop of political unrest in 1971 Mexico, things heat up towards the end of the movie as Cleo’s personal story as well as her involvement with the family reach an emotional climax.

I first heard about ROMA a short time ago when it began showing up on critics’ lists as the best movie of the year. Thanks to a direct release on Netflix, I was able to see this one at home, and I’m glad I did.

As I said, this one is slow, very slow, so you have to be patient with it, but it does move towards a huge payoff. Indeed, the final 45 minutes of ROMA are among the most emotional minutes of any film I’ve seen this year. It really delivers.

And ROMA is more than just “sitting through the slow parts to get to the end.” I thoroughly enjoyed the first 90 minutes, and then the final act arrives and the film reaches a whole other level.

I used the word effortless to describe this movie, and I did so because it’s a film where everything seems authentic, and the camerawork relaxed. You hardly think you are watching a movie. But truth be told you don’t make a movie like this accidentally.  There is a tremendous amount of artistry going on here with Cuaron’s use of the camera. The camerawork is nothing short of amazing.

There are so many memorable images in this film, so many moments where you will be blown away by the way things are shot and framed, and all of it in mesmerizing black and white photography.

There’s a scene where Cleo is doing laundry on the roof, and at the end of the sequence, the camera pulls back and you see all these clothes hanging to dry, to give you some perspective at just how much work she has done, and the camera continues to pull back and you see the entire neighborhood.

The scene at a New Year’s party where Cleo witnesses the beginnings of a forest fire in the distance is almost mystical, almost supernatural. And the camerawork during the final act is even more intense, from the rioting, to the riveting birth scene when Cleo goes into labor, and the final sequence on the beach, where you can almost smell the ocean, feel the huge salt water waves on your body.

Cuaron establishes such a sense of place, and he does this not only with the camera but also with sounds.  The sound work in this movie is extraordinary. Dogs barking, airplanes flying overhead, the quirky bands marching up and down the street, the strange street vendor singing out early in the morning. I really felt as if I were there in Roma in 1971.

Animals play an important part in the landscape. They’re everywhere, especially dogs. Also, huge planes frequently fly overhead in the distant sky. It’s as if Cuaron travelled back in time and captured everything from his childhood. It all comes to life.

The performances are also authentic and genuine, especially Yalitza Aparicio as Cleo, who captures the essence of a young woman who carries with her a quiet strength that is able to cut through all the menial tasks and makes her someone the children in the household truly love. In one telling scene, for example, where she visits the father of her child who’s taking part in martial arts training, we see the leader of the training challenge the men to take up a difficult physical position which seems at first simple, but he challenges them to try it. They all fail, but in one quick shot of the bystanders, we see Cleo try and succeed.

The child actors here are all excellent, and I also enjoyed Marina de Tavira as the mother of the household, Sofia, and Veronica Garcia also has some key scenes as the grandmother, Teresa. She walks and dresses like so many of the grandmothers I remember from my own childhood back in 1971.

ROMA is filmmaking at its finest. If you want to see a movie that displays some of the best camerawork of the year, with one of the more unassuming stories, with one of the most emotional payoffs and climaxes in a long while, then you should see ROMA.

It’s already on many critics’ lists as the best film of the year, and while I haven’t finalized my 2018 list yet, it’s certainly going to be up there.

I loved ROMA. Without doubt, it’s one of my favorite movies of 2018.

Waiting for you in Dark Corners are tales of vampires, monsters, werewolves, demonic circus animals, and eternal darkness. Be prepared to be both frightened and entertained. You never know what you will find lurking in dark corners.

Ebook: $3.99. Available at http://www.crossroadspress.com and at Amazon.com.  Print on demand version coming soon!

How far would you go to save your family? Would you change the course of time? That’s the decision facing Adam Cabral in this mind-bending science fiction adventure by Michael Arruda.

FOR THE LOVE OF HORROR, first short story collection by Michael Arruda.

Michael Arruda’s first short story collection, featuring a wraparound story which links all the tales together, asks the question: can you have a relationship when your partner is surrounded by the supernatural? If you thought normal relationships were difficult, wait to you read about what the folks in these stories have to deal with. For the love of horror!