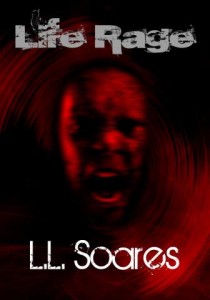 My buddy and Cinema Knife Fight partner L.L. Soares just won the Bram Stoker Award for Best First Novel this past Saturday in New Orleans for his novel Life Rage, which I reviewed on this blog several months back.

So, what’s a Stoker Award?  Each year the Horror Writers Association honors horror writers around the globe with the Bram Stoker Awards, recognizing the best horror writing of the year.  Winning a Stoker is a huge accomplishment, as gaining the recognition of one’s peers is a very high honor.  It’s also not easy to do.  Not at all.

Life Rage is a neat horror novel, hard hitting, well-written, and satisfying from start to finish.  In honor of it winning the Stoker, here’s another look at my review below:

I recently finished the novel Life Rage by my Cinema Knife Fight partner L.L. Soares.  It’s his first novel, and I have to say here, that— and this has nothing to do with the fact that we’re friends and that we co-write a movie column together — I was really impressed.

L.L. is known for his in-your-face hardcore fiction, and with Life Rage, he doesn’t disappoint.  But what I found more impressive is how human and caring his characters are, and he achieves this effect without sacrificing the extreme horror elements.

Sure, the language is rough and raw, as are the sexual and violent situations, but there’s also an honest tenderness among the characters in this story that comes off as authentic and refreshing.  In short, his characters really do care for each other.  As good as L.L. is at writing about horrific situations, he’s just as good at writing about realistic relationships.

The plot is about a Jekyll & Hyde type character, a man who treats people with anger issues, yet he’s an uncontrollable monster at times and doesn’t know it.  He turns into a sort of demonic Incredible Hulk.  The book’s lead character, a woman named Colleen, somehow survives her first encounter with the monster, signifying right away that there’s something special about her.  She sees her best friend torn to pieces by the creature, and she vows revenge.

She is aided by another woman who also happens to have supernatural powers.  Viv is a sort of vampire who sucks the life force out of people while giving them the best sex of their lives- in short, they go out happy.  Viv is attracted to people who are overwhelmingly sad, and she in effect is mercy killing them, saving them from their pain.

Colleen and Viv team up to stop the raging monster before it infects the entire world with its life rage.

I liked Life Rage because of its compelling characters— they are fleshed out (no pun intended) and three dimensional— and because of its original plot.  The writing is also topnotch.

If you’re looking to read a refreshing horror novel, and you don’t mind a lot of sex and violence, check Life Rage by L.L. Soares.

It’s all the rage.