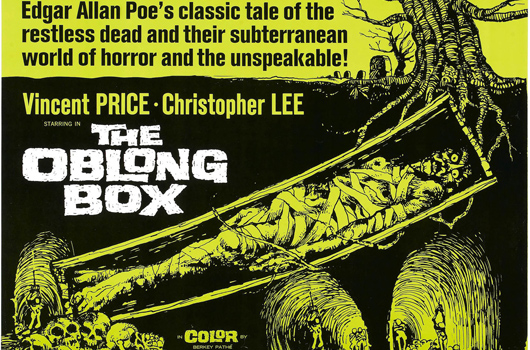 This one is a reprint from September 2010, originally published in The Official Newsletter of the Horror Writers Association:

Vincent Price made a career playing over-the-top hammy dramatic characters in colorful period pieces in the 1960s.  He’s at it again in THE OBLONG BOX (1969), a film in which he is paired with Christopher Lee.

THE OBLONG BOX is loosely based on the Edgar Allan Poe short story of the same name—very loosely, as in just borrowing the title!

The story begins in Africa, with Sir Edward Markham (Alister Williamson) tortured by natives, his face apparently scarred beyond recognition. Markham’s brother Sir Julian Markham (Vincent Price) arrives too late to save him.

They return to England, with Sir Edward now a crazed lunatic. Sir Julian is forced to keep his brother locked in chains in an upstairs bedroom of their mansion.  With the help of a family friend Samuel Trench (Peter Arne), Edward plans his escape.  They hire an African witch doctor to supply Edward with a drug to imitate death.  The plan is for Edward to be removed from the house as a “corpse” only to be revived and rescued later by Trench.

However, Julian immediately seals Edward’s lifeless body inside a coffin and unknowingly buries his brother alive. Trench decides rescuing Edward from a premature burial is too dangerous and out of the question, and so he leaves him for dead.

Meanwhile, Dr. Neuhartt (Christopher Lee) has been paying grave robbers to supply him with bodies for his research. As luck would have it, his grave robbers dig up Edward. When Neuhartt opens the coffin inside his laboratory, Edward attacks him but doesn’t kill him, deciding he could use the doctor as an accomplice.

Edward then dons a crimson hood and seeks revenge against both Trench and his brother, going on a bloody rampage through the countryside, slitting the throats of his victims. Eventually, Julian discovers his brother is still alive, setting the stage for the final confrontation between brothers, as well as the obligatory unmasking of Edward’s hideous face.

THE OBLONG BOX has long been considered too long, too slow, and too rambling by critics, but I’ve always liked its intricate plot with its many pathways.   It takes the viewer along a very creepy ride, with premature burials, African voodoo, a masked maniac, and bloody murders.

THE OBLONG BOX was supposed to have been directed by Michael Reeves, the talented young director who had just finished another Price movie, THE CONQUEROR WORM (1968) [also known as THE WITCHFINDER GENERAL), a film that had been very well received. Sadly, Reeves died before he could direct THE OBLONG BOX, and so the directing duties went to Gordon Hessler.

A lot has been made of Hessler’s lackluster direction of this picture, and I would have to agree. In spite of its strong story, there really aren’t a lot of memorable scenes in THE OBLONG BOX.  On the contrary, there are a lot of weak scenes. The bloody killings are tepid and the blood obviously fake, and the final confrontation between Edward and Julian is also a disappointment, as well as the unmasking scene.  The make-up job on Edward’s face is embarrassingly routine. Still, Hessler can direct.  Five years later, he would be at the helm of THE GOLDEN VOYAGE OF SINBAD (1974), one of the best of the Ray Harryhausen Sinbad movies.

The acting is just OK. With Vincent Price, you get exactly what you would expect, an over-the-top hammy performance. As always, he’s fun to watch.  Christopher Lee is cast against type as the decent Dr. Neuhartt, but sadly, there’s not a lot for him to do with this role.

Alister Williamson is a disappointment as Sir Edward Markham.  As the main villain, Edward should dominate this movie. He doesn’t. Had Christopher Lee played Edward, THE OBLONG BOX would have been a much better movie. Of course, I can understand Lee not always wanting to play the bad guy. Trouble is, he’s just so damned good at it! I wish he had played the role.

Speaking of bad guys, probably the most memorable performance in THE OBLONG BOX belongs to Peter Arne as Samuel Trench. Trench is the slimiest character in this movie, and Arne plays him to the hilt.

But the most disappointing part of this movie is that in spite of the pairing of the two horror superstars, Price and Lee only share one brief scene together. Rip-off!

And the final nail in the coffin— heh, heh— regarding THE OBLONG BOX is that its ending doesn’t make any sense. It’s one of those endings where you see it and you know it was shot just to have a shocking last scene, even though based upon what has happened before, it makes little or no sense.

But even with all these flaws, I still like THE OBLONG BOX, for the simple reason that I love its plot, an exciting roller coaster ride of frights and thrills.  The screenplay was written by Lawrence Huntington, with additional dialogue by Christopher Wicking.

THE OBLONG BOX is an example of a movie that succeeds because of the strength of its writing. The direction is fair and the acting okay, but it’s the writing that lifts this one to memorable status, which is a rare thing in movies, a medium dominated by directors and actors.

FOR THE LOVE OF HORROR, short story collection by Michael Arruda.