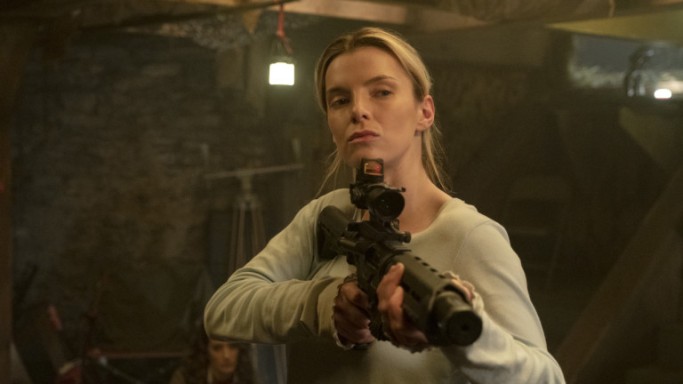 THE HUNT (2020), the new thriller by writer Damon Lindelof, who was part of the team that brought us the classic television show LOST (2004-2010), and who also wrote the screenplay for WORLD WAR Z (2013), is yet another of those horror movies featuring the unpleasant concept of humans hunting humans.

It’s what we saw in THE PURGE movies, and in last year’s clever dark comedy, READY OR NOT (2019), which starred Samara Weaving as a bride hunted by her new husband’s family on her wedding night. While I enjoyed READY OR NOT and its deliciously dark sense of humor, I’ve never been a fan of the PURGE movies. They simply haven’t worked for me.

Neither did today’s movie, THE HUNT.

The premise in THE HUNT is that a group of people are abducted from their everyday lives, and when they awake, they find themselves in a clearing surrounded by woods only to be immediately shot at by unseen hunters who have declared open season on humans. This actually sounds scarier than what the movie ultimately becomes, and that’s because THE HUNT suffers from a serious case of the stupids.

More on this in a moment.

It doesn’t take long for nearly every character in the film to meet a grisly and horrific death. We’re talking in the first ten minutes of the movie. Which leaves one character Crystal (Betty Gilpin) to stand her ground and fight back. Fortunately, Crystal is the one interesting character in the entire movie, and Betty Gilpin’s performance here is the main reason to see this one. Otherwise, it would be a complete disaster. That being said, it’s still pretty bad.

See, the premise here in THE HUNT is a group of liberal elites who spend their days talking about fighting racism, taking care of the environment, and other “liberal” issues decide to take it upon themselves to help the world by ridding it of some of its less desirables, people of the opposite political persuasion- in short, people they see as rednecks.

Or so it seems. Eventually we learn the real reason why these victims were selected. It’s a very specific reason and one that really strains credibility. In fact, it’s flat out stupid.

The liberal elite hunters come off as caricatures rather than real people, which really hurts this movie. Likewise, the victims are also exaggerated stereotypes. Both sides are portrayed as pigheaded bigots, which I suppose is the point of the movie, a point that would have been more effectively made had its characters behaved like real people rather than cliches.

The screenplay by Damon Lindelof and Nick Cuse also can’t make up its mind whether or not it wants to be a straight thriller or a satire. Its over the top dialogue definitely has it leaning towards the satire end of the spectrum, but the writing isn’t sharp enough to pull this off. Not only didn’t I laugh, but I was hardly even amused. Attempts at humor failed left and right. No pun intended.

And then the premise just gets dumber and dumber. When we finally meet the person behind the hunt, Athena (Hilary Swank), and learn her back story, it asks the audience to accept a plot point that is absolutely ludicrous.

The climactic fight scene between Crystal and Athena is a good one, and one of the bright spots of the movie. But there aren’t too many positives here. Director Craig Zobel keeps the blood flowing throughout, but few scenes have any resonance. The over the top violence seems to be going for laughs, but it doesn’t really work.

The only reason to see THE HUNT is for Betty Gilpin’s performance. She’s really good, and Crystal is the only character in the film who doesn’t wear her political views on her sleeve. The rest of the characters all do, and none of them seem all that realistic.

The film is a sloppy attempt to make a statement about the divisions in our current society, but it completely fails. The writing isn’t sharp, the characters come off as phony, and the humor doesn’t work.

THE HUNT is an ugly movie which most likely will be attacked by both sides of the political spectrum as doing a hatchet job on their respective camps. And in this case, both sides would be correct. 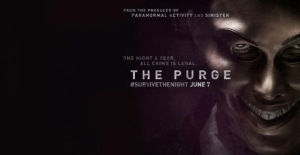 THE PURGE (2013) is an ugly movie about an uglier subject.

The year is 2022, and in an attempt to reduce crime and poverty, the government of the United States sanctions a yearly holiday known as “the purge,” in which crime is legal for twelve hours.  During this twelve hour period, people can commit any crime they want, including murder, without fear of punishment.  The philosophy is that this brief free for all purges people of their aggressive feelings while controlling the homeless population, who are vulnerable and make easy targets.

James Sandin (Ethan Hawke) makes home security systems for a living, and as you might expect in the age of the purge, the home security business is booming.  Sandin is doing quite well, and he and his family, which includes his wife Mary (Lena Headey) and two kids, teen daughter Zoey (Adelaide Kane) and son Charlie (Max Burkholder) hole themselves inside their posh home on purge night, protected by dad’s state of the art security system.

But when young Charlie sees a man (Edwin Hodge) on the street pleading for help, the boy panics and lets him inside their home.  A group of nasty youths wearing masks led by a preppy lunatic (Rhys Wakefield) is hunting this stranger.  They surround the house and tell the Sandins to release the man to them, or they will kill everyone inside.

Things are further complicated because Zoey’s boyfriend Henry (Tony Oller) is also in the house under the pretense of earning the approval of her father, but his true motives involve a gun.  And when the electricity is cut and the masked lunatics invade their home, the Sandins realize they have no choice but to fight for their survival.

The biggest problem I had with THE PURGE is its ridiculous premise.  What a dumb idea!

I didn’t believe that a one night free-for-all of unprosecuted crime was a good idea before I saw the movie, and I certainly didn’t think so after seeing it.

Unlike the convincing THE HUNGER GAMES (2012), another movie with an outlandish premise— a culture that accepts as entertainment a sporting event in which children fight to the death— THE PURGE never made me believe that these events were actually happening.

The only characters we get to know are the members of the Sandin family, and they’re a rather strange lot.  Everyone else in the movie either acts like robots or in the case of the wild gang outside the Sandin’s home, like they’re on drugs.

I never had a feel for how real people felt about the purge, nor did I get a sense as to what kind of government was in charge.  A Nazi-like regime?  Religious-Right gone mad?  Extreme Obamacare?  Tea Partiers on steroids? No idea.

The story takes place in 2022, which is not even ten years from now.  It seems unlikely that an extreme event like the purge would take root in so brief a time.

Ethan Hawke, so intense in last year’s SINISTER (2012), is cold, clueless, and annoying here as James Sandin.  As the head of the household, he does a terrible job of protecting his family.  Nearly every decision he makes is the wrong one.

His wife, Mary, played by Lena Headey, has a better head on her shoulders, but she’s constantly reacting to her husband’s mistakes rather than taking the lead in the situation.  Headey’s not bad here, but she was much more memorable and more enjoyable as the villain Ma-Ma in last year’s DREDD (2012).

I enjoyed Adelaide Kane as teen daughter Zoey, as she seemed like a real person, but she spends most of the movie being a victim.  Max Burkholder’s Charlie is an odd sort, and I have to admit I found him incredibly annoying.  Plus, he lets the stranger inside their house, which seems like a huge no-no, and it’s difficult to believe his parents didn’t beat him over the head with the directions “never let anyone inside the house on purge night!” They don’t even tell him as much after the fact.  I didn’t buy this plot point, which is the trouble I had with most of the movie.  I didn’t buy it.  It didn’t convince me.

The stranger (Edwin Hodge) spends most of the movie bound and gagged, so what little sympathy he evokes is minimized.  Rhys Wakefield makes a decent psycho, but we ultimately learn so little about him, he’s hardly a factor.

The premise of THE PURGE, as unpleasant as it is, is full of promise.  It’s simply not executed to its full potential by writer/director James DeMonaco.  We’re supposed to witness a conflict of conscience, between husband and wife, over what they should do about the man inside their home.  Should they become like the freaks outside and participate in the purge or should they hold onto their ideals and remain above the fray?  But this debate never takes place to any degree of satisfaction.

Early on, there’s a brief discussion between young Charlie and his parents, as he asks them why they don’t participate in the purge.  His dad tells him it’s because they don’t have any problems with other people, and then Charlie presses the point and asks if his father did have a problem with someone else, would he then participate in the purge and kill someone?  His dad admits that yes, he would.  I guess the more civil method of settling differences through conversation and legal channels is passé.

When James wrestles with the stranger to subdue him, he insists that his wife Mary stab the man.  In the film’s ugliest moment, she gives in and jams a letter opener into the man’s wound.  What are these people thinking?  They’re not thinking, and that’s clearly the problem.

THE PURGE would have benefitted from some stylish direction— some unusual camera angles, strange dissolves, or intense choreographed action— in order to give it a futuristic feel or at least something to indicate that we’re dealing with another world here, the world of the purge.  Heck, even the inside of the house isn’t clearly defined, as the bulk of the action takes place in the dark.

There’s also something a bit “off” about this movie.  Parts of it seem disjointed.  When Charlie first lets the man inside the house, it occurs at the same time that Zoey’s boyfriend confronts James, yet the expected chaos following these simultaneous events ends abruptly.  Later, a key moment when the stranger captures Zoey occurs off-camera.  The intensity is also lacking.  When the masked mob finally breaks into the house, the scenes that follow are nowhere near as extreme as they need to be.

The main villain in the movie, Mr. Preppy Psycho (he doesn’t have a name in the movie) is a complete lunatic, but he never becomes someone truly frightening, which raises another problem.  THE PURGE may be dark and disturbing, but it’s not scary.

It also doesn’t help that very few of the characters in the movie act like real people.

THE PURGE could have been a hard hitting thriller had it not purged itself of its humanity.